JSSC Paper Leak: JSSC has cancelled the Jharkhand Diploma Level Combined Competitive Examination held on 03rd July. The next date of the exam will be released on the official website within three months. 1,289 vacancies of Junior Engineer will be filled through this recruitment exam. 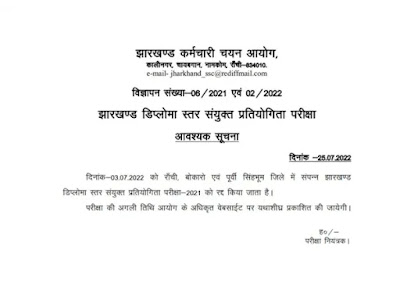 JSSC (JSSC) has canceled the Jharkhand Diploma Level Combined Competitive Examination held on 03rd July. The Commission recently issued a notification stating that the Jharkhand Diploma Level Combined Competitive Examination held in Ranchi, Bokaro and East Singhbhum district is cancelled. Some of the candidates who appeared in this recruitment exam were continuously demanding the cancellation of the exam. The next date of examination will be made available on the official website within three months. 1,289 vacancies of Junior Engineer will be filled through this recruitment exam.

Significantly, in the paper leak case, the police arrested one of the prime accused Ranjit Mandal from Keonjhar in Odisha on July 23. Three mobiles including the one used in leaking the paper have been recovered from him. He has admitted his involvement in the paper leak case. Police is finding out who else was involved in this whole case.

The JSSC had lodged an FIR on July 15 in Ranchi’s Namkum police station after receiving several complaints from across the state. Commission chairman Sudhir Tripathi had requested the state DGP to take immediate steps to investigate the matter. After this, the DGP constituted a team under the leadership of DSP Neeraj Kumar, who arrested an accused from Orissa. After investigation, the accused confessed to his involvement in the paper leak case.

The candidates demanding cancellation of the examination say that the officers are involved in this matter. On Monday, the Jharkhand State Students Union had also staged a sit-in for the whole day demanding action in this matter. There is a demand of the students that this examination agency should be blacklisted forever and a trust committee should be constituted to conduct the re-examination. Also, the exam should be conducted again on CBT mode within three months. It has urged to take strict action against the officials involved.